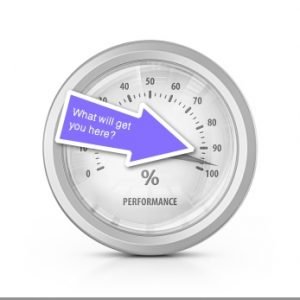 There’s an old saying in business: the two great motivators are fear and greed.

They may be common motivators, but I’d argue that they’re decidedly not great. Here’s why: If you motivate people with fear, they certainly have a sense of urgency.  The cataclysmic event, whether corporate (we might be out of business!) or personal (I might be out of a job!) lurks beyond the horizon. It drives people. But it drives people to run away from it.  And once that bogeyman is evaded, what’s your next act as a leader? You have to create the next potential disaster to get people moving again – because after fleeing for months or years, most people decide they need a little rest. So they sit…

So if Fear creates an empty, fleeting urgency, Greed creates a different kind of urgency – an explosive one.  Greed (I’m going to get mine even if I have to step on you) works well if your organization doesn’t really need collaboration.  But Greed almost always devolves into petty competition.  You may be running toward something, but you’re constantly looking over your shoulder to be sure you won’t be run over by a colleague. Especially deflating is the greed of the boss (“Do this so that I can be filthy rich and you can get crumbs”).

One other downside of tapping into Greed: eventually – for most of the population – we have enough.  The greedy incentive that used to motivate us no longer gets us out of bed. We’re looking for something else, though if we’ve been on the greed drug for a while, we may not know exactly what it is.  But the result is (again) that we might just sit down and take a rest. That’s a bad day for the leader.

I’d argue that a better – and much rarer – approach is to be hungry for great things.  Pick an achievement that no single person (or subgroup) could achieve on her own.  Make it something that taps into intrinsic motives (we’d be the best!, we’d be the first!, we’d change the world!, we’d completely wow our customers!). Yes, find the WIIFM (what’s in it for me) but make sure there’s also a WIIFU (what’s in it for us). Then run toward it – together.

What fuels your organization?