Matt the CEO loves to set super-ambitious goals. If a normal person would look at the numbers and suggest that his organization should grow 10%, you can bet your airline upgrade that he’ll target 20%. Ask him why he does this and he has a simple, snappy answer: If we set high goals, even if we don’t make those goals we’ll still achieve more than if we set lower goals. 80% of a super-aggressive goal is better than 100% of a lame goal.

I guess if Matt puts it that way, it’s hard to argue with him. But I think his higher performance comes at a huge price. Let’s look at it from the point of view of a sales executive named Jamie.

Jamie’s been in the selling game for most of his career. He’s done well and has a shelf full of plaques and a smartphone full of President’s Club photos to prove it.  Jamie’s colleagues inaccurately assume that, like all salespeople, Jamie is coin-operated. Drop more financial incentives on him, and he’ll be a sales machine. Don’t get me wrong – Jamie loves the ka-ching of that big bonus as much as the next guy. But Matt’s miscalculation is that Jamie only cares about money. In fact, Jamie cares mostly about achievement and esteem. He gets a buzz out of hitting goals and being seen as a key player – maybe the key player – on the team. 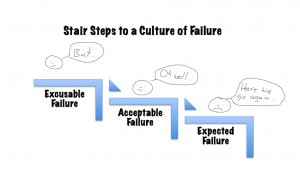 So stretch goals work for Jamie. But over-stretched goals are counterproductive. Here are the costs of over-shooting on goals:

Great organizations know that people are motivated by fully achieving challenging goals on a regular basis. Here are a few ways you can foster that kind of high-achievement atmosphere as you do your planning this year.

The spirit should be “I’m here to do the best work of my career for our customers and for the rest of you on this team. I reach high and I keep my promises.” Yes, that creates tension.  But high performers happily choose to live in that tension.