Lessons From A Redemptive Entrepreneur

It was high praise from the former senior partner of a highly respected strategy consulting firm, a guy who deals in big ideas every day. I had just shared the concept behind one of my client’s new ventures over lunch. While still in its early days, this company aims to change how $200 trillion gets managed every year. Yes, that’s trillion with a T. Can you say b-i-g i-d-e-a? 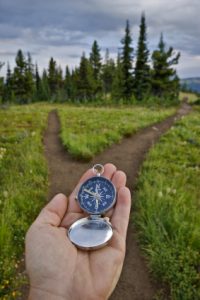 What waits off the beaten path?

But I heard a piece on NPR this summer about a group of Harvard MBA’s who may have an even bigger one. They decided to swap a typical summer internship for a road trip to help entrepreneurs. Maybe it says something about us as a society that we’re surprised that four bright, young people would break from the herd charging up the well-trodden path toward the top of the world to spend time working with ordinary people in middle America who are trying to make their business dreams a reality. Let’s face it, the world those students live in solves for money, power, and status. Helping entrepreneurs figure out how to launch sustainable and socially responsible businesses isn’t the most direct path to the top.

But as impressive as those MBA students’ choice was, I’m even more intrigued by the people they chose to help: an inner city hair salon, a designer of rugged women’s work clothes, and a micro-brewery.

Take Sebastien Jackson, a young African American man in Detroit. His vision is to use a for-profit business – in this case, a hair salon – to drive cross-racial understanding in one of our toughest and most segregated cities. Now that’s a big idea. Instead of fleeing his city, Jackson is choosing to put his efforts into transforming it. In his case, he used what was close to his hands and his background to get started. He had worked at a salon prior to starting The Social Club Grooming Company. Now he wanted to use it to crack the code on racial reconciliation.

That’s what redemptive entrepreneurs do:

Maybe the example of the Harvard MBA’s points out another mark of the redemptive entrepreneur. A redemptive entrepreneur sees herself as one piece of a tapestry of like-minded people who are determined to use their skills for the common good. She doesn’t have to do it all. She just has to do her part and find others who are also doing their part. Put together, they create something useful, meaningful and even beautiful.