Getting The Math Right 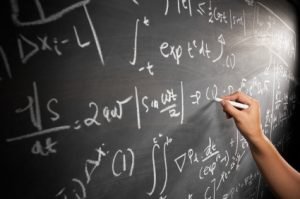 Too many of us hate our jobs and live in fear. Even the super-successful. And it’s our own doing.

I had lunch with a super-talented guy recently. He has a resume to die for – blue chip schools, top tier firms, big titles. Amid his success he had been bounced out of companies a couple of times, as people do when they play at senior levels. Even though he has been incredibly successful, I sensed a deep worry about whether he had ruined his career, about how many opportunities he had missed. The smell of fear mixed with the aroma of the pasta.  I walked away feeling badly for him but also frustrated. This happens to so many of us. Why do we strive and achieve and yet still get chased around by the barking dogs in our heads?

Maybe it’s because a lot of us work for goofy reasons. Oh, I know that most of us have to work. We weren’t born into a fortune. We like to eat and eating costs money. But most of us aren’t driven by the need to eat. Not if you’re reading this on a screen somewhere. If you were really fleeing starvation, you wouldn’t have time for this kind of rumination.

As smart as we are, a lot of us have gotten the math all wrong about our work. We think that if we’re super successful and we don’t totally lose our souls in the process, we’ll be happy. The equation goes something like this:

Success + Being a Decent Person = Contentment

Only, that equation doesn’t really work. If it did, I’d have a parade of lunches with people who had silly, contented smiles on their faces because I regularly mix with really accomplished, decent people. Instead, too many smart, high-achieving people are secretly lost. In fact, their happiness is too often inversely proportional to their visible success.

What would happen if my friend lived with this equation in mind?

Simple, I know. But in a culture that actually glorifies dissatisfaction as a noble trait, think of the implications of switching your emphasis:

Don’t think for a minute that conventional wisdom will make sense of this. Our world trades in fear, insecurity, and scarcity. It knows that you can motivate people to buy and sell anything – even their very happiness and souls – when motivated by those barking dogs. The purveyors of dissatisfcation equate contentment with resignation. But they’re wrong. Resignation says that things aren’t that good and they’re not likely to get better. Contentment celebrates that things are actually quite good, and that – in the grand scheme of things – all is well.

So this Thanksgiving, think about your life and work.

Maybe you just realized that you had the math wrong and you’ve decided to work from a new equation. That’s worth giving thanks for too. Because it all starts with getting the math right.