“We suck at decision-making on this team.”

Of all the complaints I hear about leadership teams, this one ranks near the top. Effective leadership teams know the plays they have to run over and over. Decision-making is a fundamental play, but one that is often busted. That’s frustrating to team members because intuitively they know decisions are what teams are supposed to be good at. Here’s how to diagnose a horrible decision.

So where’s the decision-making problem?

It starts with an impending decision. Often, the choices latent in the decision are imprecisely defined or poorly understood by a portion of the team. This lack of shared understanding immediately clouds the issue as people fill in blanks or privately resolve ambiguities with their own versions of reality.

Since one of the questions all team members are constantly asking themselves is, “Do I have control over my environment?”, people immediately start attempting to influence the decision itself or the process by which the decision will be made. You’ve seen this a thousand times. Team members lobby, sending private emails or grabbing time with the boss outside of formal meetings.

Often, team members build or tap into alliances with other members of the team to create even more influence. This alliance-building isn’t good or bad. It’s a completely rational strategy for people who care deeply about a decision and realize that they can’t influence the group solo. Alliances aren’t damaging in themselves. How they are handled is what makes the difference. If communication becomes more transparent, there won’t be a problem. But if it doesn’t, an insecurity driven territorial battle is likely brewing.

The differences between alliances may erupt into an overt clash in a formal setting like a team meeting or, even more damaging, in the hallways of the organization. We’ve all been part of organizations where poorly handled differences in the leadership team results in range wars in the corridors. Often, no one is sure how the decision is going to be made and what role each team member will play in the decision. The result of a poorly organized and poorly run decision play is chaos, carnage, and confusion.

After which, the leader often cuts off the conflict to restore order. Unfortunately, the conflict has just gone underground.

Sometimes team leaders shut down the bubbling conflict before it becomes overt. Their instinct is to smooth over differences. Or, they take the decision out of the hands of the team by making it themselves. But the differences of opinion in the alliances remain, again pushed underground.

Regardless of whether leaders smooth over conflict, take decisions away from the team, or allow decisions to erupt into a range war, the team exits this decision-making experience with less confidence in themselves as a unit than before. To complicate matters for the leader, they probably have a lower sense of ownership as well. Instead of learning, “We can do this!” they’ve learned, “I guess the leader will have to do this.”

Correcting the decision-gone-wrong pattern starts with a proper diagnosis.

So before we jump into how to fix this, think about the last time you had a less-than-stellar decision process with your team. Ask yourself:

Conflict is often decision-making in disguise, so when you know why decision-making goes wrong, it’s like getting a twofer: with a little careful diagnosis, you can improve decision-making and make conflict more productive all at the same time. Since decision-making is one of the most foundational plays any leadership team is going to run, a little diagnosis will get you on the road to running that play effectively and making conflict constructive. 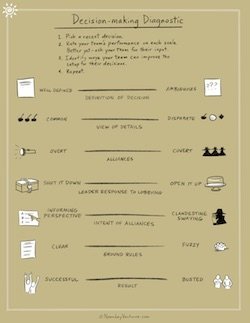 Does your team suck at decision-making?

Use this handy tool to diagnose a horrible decision and improve next time.

Thank you for your interest. Be bright.