Is Your Team On Track?

Have you ever woken up one day wondering “Is our team on track or off in a ditch?”

It’s a fair question because while the map to peak team performance is charted, it’s not always easy to know whether you’re on the path or bushwhacking at any given time.

You’ll be tempted to resort to mental shortcuts as a way to feel better about your uncertainty. Do we like each other? Are we in conflict? Are the results good right now? Does everyone know their job?

It doesn’t take long to debunk those cheats.

These indicators might tell you roughly where you are on the map, but they won’t tell you whether you’re straying off the path or not.

For help answering that question, let’s look at the emotional connections of the team members to the mission and to each other.

I know that about half of you are about to bail on this post right now. “Emotional connection? At work? With those people? You’re bat#$% crazy.”

I’m with you. I grew up as the youngest of five boys where the only feelings we discussed were our anger and hunger. But give me a minute to make my case.

Teams should exist when there’s something important at stake beyond the reach of your individual effort. The stakes might be starting a new kind of company, curing a terrible disease, or sending humans to Mars. They may be more modest like making your workplace a decent place to work for real humans. If you can achieve your dreams solo, go for it. If not, you’re stuck with a team whether you like it or not.

To be useful, a team has to create a platform for risk-taking and investment big enough and strong enough to support the shared dream. If everyone looks around the team and says, “we’ll never make it,” that team is a miserable time suck that will only make you feel drained and hopeless. See also, “If you can go solo, you should.”

Now to our Attachment Theory friends. They say that if you’re human, you’re a bonding mammal (except Joe from accounting, but we’re looking for general principles). You’re hard-wired to look to others for support, to wonder if others have your back. This isn’t a weakness. This instinct for bonding helps humans get all sorts of things done that wouldn’t happen without it. We cure illnesses and reduce preventable deaths and travel to the moon because we work together. Even if you see our desire for bonding as a weakness, it’s a fact. Get over it.

Without trying, you assess every social interaction for its ability to provide you with the connection and support you need. When you ride a bus, it’s pretty casual. “Can this bus driver and these fellow passengers not become a hostage crisis long enough for me to get to the office?” When you’re thinking about marriage, it’s way more serious. “Can I imagine weaving my life with this person for the rest of my life?” That question has caused more than a few sleepless nights for engaged couples, as it should.

Work teams are somewhere between the bus ride and a marriage. When you’re in a team, you assess whether to take the personal risks necessary to do something big. You’re really asking “Will these people be there for me when I need them? Will they have my back when I put myself out there – even if I make a mistake? Or are they going to desert or attack me when I’m vulnerable?” Those are fair questions. Most of us have at least one team horror story in our work history.

We’ll never quite put these “Will they be there for me?” questions to bed. They will be there, always demanding to be answered. That isn’t all bad. A really good team and a really effective leader will embrace those open questions and use every circumstance – especially every challenging circumstance – to answer those questions with a resounding “Yes!!” Over time, teams that keep providing positive answers to those have-my-back questions become more stable and more capable of doing big things together.

So back to our opening question, how do you know if your team is on track or if it’s in the ditch? Look around the table and ask how connected each person is to the mission and to the group. 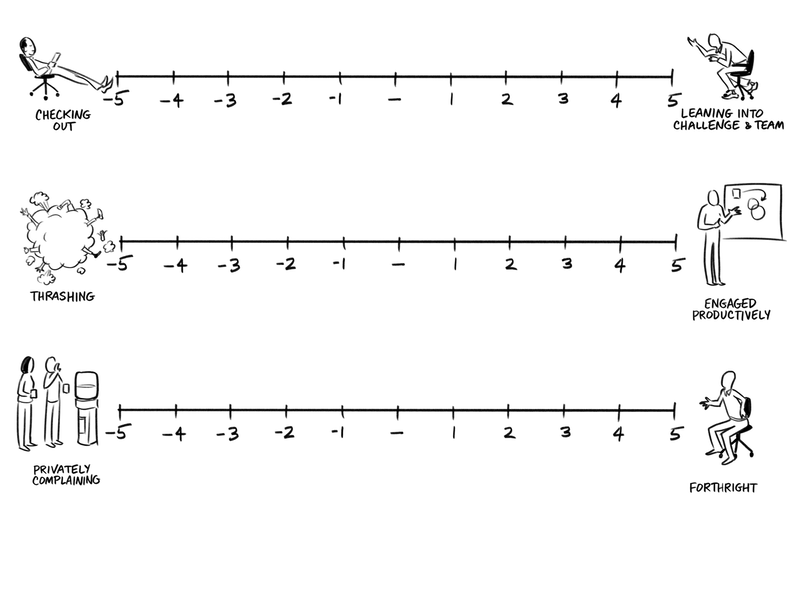 This helps us separate the signal from the noise of team life.

Our Brightest Ideas Delivered To Your Inbox