Mandela: The Imperfect Nobility of a Great Leader

Like those last bittersweet days before you send a child off to college knowing that family life will never be the same again, the world is coming to terms with saying goodbye to Nelson Mandela. Whether it’s today or next week or next month, it appears we’re in the final days of our time with the one they reverently call Madiba. It’s a good time for taking stock. 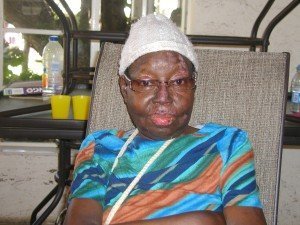 Maria, one of my friends at the HIV hospice

I was lucky enough to visit South Africa last year. In a whirlwind week-long experience, I got to see and touch many parts of that complex country: the leafy suburbs of Johannesburg where the wealthy live behind walls and gates while being served by a largely black servant class; an HIV/AIDS hospice where young and old, male and female, mostly black and a few white come with hopes of recovery but too often die; a tent church pastored by a dynamic and courageous black pastor in a township; a squatter camp where 65,000 people live in one squalid square mile and in sight of a gated community with an irrigated golf course.

South Africa’s problems are far from solved. As Bishop Phineas, the black pastor, said, “We have political equality in South Africa. But we are a long way from economic equality.”  You don’t reverse hundreds of years of injustice in two decades.

But stop for a second and imagine what South Africa might be like if it weren’t for remarkable people like Mandela. South Africa has transitioned from minority rule to a fairly stable democracy. There was no prolonged violent revolution after Mandela’s release from prison. There have been no coups. There weren’t the bloody rampages that we might have expected. There is plenty of chaos and difficulty, but it could have been worse.

It could have been Zimbabwe. Look just to the north and see what happens when a different sort of leader seizes control. There, the people have had to endure inter-tribal warfare, terrorizing of the white minority, and complete economic meltdown. Of course, there is more at work here than simply a different leader, but there’s little doubt that South Africa’s trajectory is different at least partly because of the difference between Mandela, Bishop Tutu, et al vs. Robert Mugabe.

Mandela has been far from perfect. He led a violent movement before being sent to prison that planned and carried out terrorist acts. The party he helped lead has experienced corruption and strife. His family life has been marred by marital trouble probably at least partly caused by his single-minded devotion to his cause.

But the man who championed Truth and Reconciliation vs. the alternative of Spin and Retribution has been a gift to us all. Sometimes we equate nobility of character with what people don’t do. They don’t get caught in scandal. They don’t get dirty. They’re prim and remote from the mess. Not people like Mandela – no, we define him mostly by what he did. He has been neither the pinched, religious type who avoids getting dirty nor the flamboyant, self-aggrandizing type who gets involved to boost image or Klout or wealth. He’s not about any of that. Instead, he seems to have simply looked for what needed to be done to serve those around him and gotten on with it.

We all know that’s not normal. And it seems likely to me that his ability to lead that charge with such nobility, such dignity started with the inner work he must have done while in prison. In that cell, he undoubtedly came to understand that he had an important serving role to play if and when he saw the light of day. While that role would not as directly yield him power or vindication as Mugabe’s approach, cooperating with the path of the just through truth and reconciliation conferred on him a benefit far greater than any palace or fortune or sweet revenge. It gave him nobility of character, contentment, and the near-universal respect of the world.

Rest well, Madiba. And thank you for your example.