Ben has a problem. He just took over the leadership of a company that until recently had been on a bad losing streak. Two years ago, the board brought in a turnaround artist who used a combination of hard work and brute force to arrest the decline.  As a result, a large portion of the current leadership team is new to the company. The good news is that they think of themselves as a collection of winners, pulled together with various experience to reverse their company’s fortunes. You can feel it in the nervous tension in the group. The bad news is that they aren’t winning as often as they should.

Ben thinks through what to do in his first few months as CEO. He knows his team members want to get moving, to get things done, to create results. Their instinct is to do something. Ben knows the typical tools used to get an organization rolling; restructuring, incentives, public floggings, optimistic road shows. He’s skeptical that these moves will work here. He’s no rookie. He’s seen what happens when you try to manipulate an organization. Smart people check out or become completely self-focused just when you need them to care about customers, the company, and most important each other. 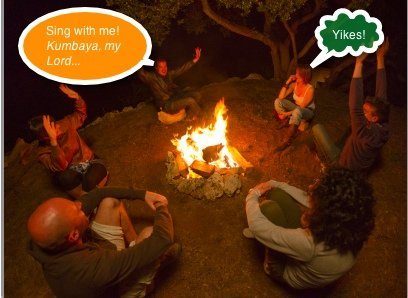 While there are structural issues to address, Ben’s gut tells him that he needs to get his team together and do something, but it’s something that they’re going to hate: work on how they interact as a team. Without this, they can restructure all they want but the magic still won’t be there. He can imagine the thought bubble above the heads of many team members: “A kumbaya session? What does any of this have to do with getting results for our company?” He gets it. It’s a thought he remembers having at points in his career too.

From hard experience, Ben knows that there is often a strong connection between how his team works and the results they’re going to get. When his past teams were able to work through challenges without having it get personal, they could tear apart a miss in the last quarter’s numbers without damaging drama. When those past teams carried relational baggage, even deciding where to hold the next year’s sales meeting got sporty. Forget about dealing with the really tough issues that drive performance. You could almost feel the wind come out of those organizations’ sails.

Ben knows a secret that many leaders don’t grasp:  Leadership teams are responsible for managing one of the most elusive commodities in the world: momentum.

Momentum is the degree to which your people sense progress, excitement, and confidence in what’s happening. You know you have momentum when people are going the extra mile for each other, watching each other’s backs, and resiliently handling setbacks. You know it’s missing when everyone is looking out for themselves and maybe looking for a job in their spare time.

Sure, you can fake momentum. That’s called hype. It works for little while but it’s not sustainable. Once exposed, hype gives your credibility – and the company’s – a mortal wound, after which you will need to brush up your resume because the ship will likely sink.

Here’s how leadership teams – and how they work together (or don’t) – affect organizational momentum. This explanation builds on thinking from Mike Blansfield via Marvin Weisbord who first articulated these observations. Hats off to my colleague Mark Demel for making the ideas visual. 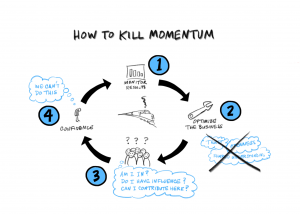 Like many things in life, momentum works in a self-reinforcing cycle.

But flip that story around. 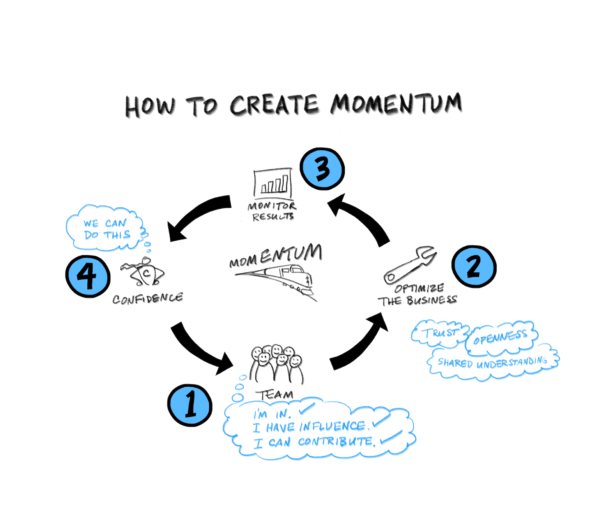 What’s the next step you can take to build momentum on your team?