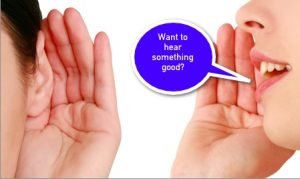 Most of us are taught about the downsides of gossip. (Not that it stops us!)  But I think gossip can be really constructive.

Here’s why: Leaders are constantly bombarded with bad news, problems, and criticism.  It’s part of the territory.  If we’re going to lead, we have to get over it and keep moving.

But don’t believe for a second that just because it’s part of the leadership package, leaders aren’t affected by the steady diet of difficulty.  Here’s where positive gossip comes in. What happens when we tune ourselves to notice when something good is said about a colleague/leader/client and we pass it on? Good stuff happens.

An example: A while back, I introduced a colleague to a leader who is doing a tremendous job under very difficult business circumstances.  Afterwards, I asked my colleague if he would be open to some “off-the-clock” support for this leader.  He responded with a three-line email that basically said, “I’m totally up for it.  Based on what I’ve seen of this guy, he’s a leader I 100% respect and would love to support.”

I saw an opportunity.  I decided to forward that email to this leader.  My forward to the note was simple:

My colleague wrote this note.  He didn’t do it for your benefit and doesn’t even know I’ve forwarded it to you, but I thought you should see it.

His reaction? “Thanks – you have no idea how much I needed that…”

But maybe someone you know is due some positive gossip.  Why not pass it on?