I recently wrote a eulogy to a remarkable black bear named Yellow Yellow. She was the unusually resourceful bear who beat virtually every bear canister in her efforts to mooch food from campers in the Adirondack mountains. She was so ingenious that bear canister companies used her as a four-legged test lab for their designs. 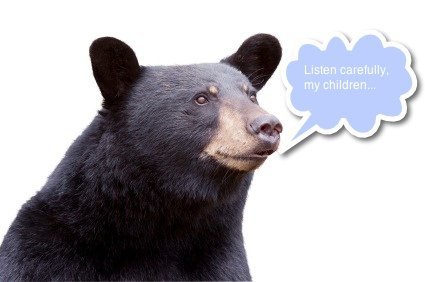 We know Yellow Yellow was a genius. What will only become clear with time is whether she was more than a genius. Was she also a teacher?  Every couple of years, Yellow Yellow had cubs. Now that she has gone the way of all flesh, we’ll find out just how much she passed on to her cubs.

If Yellow Yellow was just a genius, it’s only a matter of time before Adirondack hikers will be dealing with average bears using average tactics to steal food. But if Yellow Yellow was a teacher as well as a genius… well, watch out. She may just have permanently raised the level of play for bears in the area. This would be very bad news for hikers and very good news for anyone who can invent and patent an effective next-generation bear canister.

If Yellow Yellow is like most geniuses, I’m putting my money on the return of the average bear: persistent, sometimes aggressive, but not particularly clever. Most geniuses are lousy teachers precisely because they’re geniuses. They’re naturals. They see things the rest of us can’t. They do things the rest of us can only dream of doing. And they’re often impatient with normal people. For that reason, their organizational impact tends to die out not long after they leave the scene. We wistfully look back and say, “Remember the good old days when Joe was here? He was so brilliant!”

I worked in a company once that was started by a genius. He was a creative whirlwind. He mesmerized groups with his storytelling and insights. He attracted other remarkable people. The company never felt the same after his departure. Whereas it used to churn out ideas that clients enthusiastically embraced during the founder’s days, very few of the company’s own concepts flew very far once he had gone. Most commercially successful projects in the post-founder days came from partnering with outside geniuses. Whether it was intentional or not, the company essentially became a sales force for other people’s ideas. That was quite a come-down for those who had enjoyed the genius years.

What would it take for Yellow Yellow to be not just a genius but a teaching genius?

All of that requires patience and humility – two traits rarely found in geniuses – and an organization that is smart enough to extract the lessons from their genius’s behavior.

Maybe we should ask ourselves a few questions about how we handle the extraordinary people in our lives: