Lessons From An Inferno

Many of us read with sadness about the deaths of 19 members of the elite Granite Mountain Hotshots firefighting team earlier this summer. Despite their best efforts and extensive expertise, they died when they were over-run by a wildfire that even overcame their emergency shelters. Their loss reminded me of a situation that very nearly ended up similarly during a forest fire in northern Minnesota two years ago. The review of that situation led to some important lessons for us all. 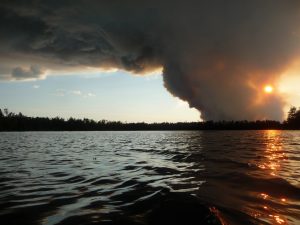 But first, imagine this scene: A group of people on a remote wilderness lake are overtaken by a raging wildfire. They jump into canoes and paddle for their lives as the shoreline they just left explodes into 100-foot flames. Though it’s midday, the sun is blotted out by the fire’s smoke, so much so that they don headlamps. The smoke is so thick that the person in the stern of the canoe can’t even see the bow of the canoe only 18 feet away. The wind created by the wildfire whips up huge, ocean-like waves and fires embers at the paddlers like a machine gun. The canoes struggle to avoid being swamped, then surf downwind in a desperate dash away from the inferno. The campers are separated from each other and left to try to figure out how to survive in pairs.

If this were a summer movie screenplay, you’d expect Kevin Bacon to pop up as a shady character behind it all. But these are the actual terrifying circumstances faced by eight backcountry rangers during the massive Pagami Creek forest fire in Minnesota’s Boundary Waters Canoe Area on September 12, 2011.  (To get a sense of how big this fire was, we had smoke from the fire creating haze in Chicago, 400+ miles away.)

The team had been assigned the seemingly benign job of clearing campers out of harm’s way as the fire – thought to be miles away – proceeded across the lake-dotted landscape. They had no idea that morning that they would be fleeing for their own lives and pushing their survival skills to the absolute limit.

Here’s an interesting tidbit buried in the report: Team members had been briefed on what to do if they were overtaken by the fire. One idea was to paddle out into the lake and then ditch out of the canoe, using the water as a safe zone from the fire. Also, each member of the team had an emergency fire shelter in their gear, a high-tech foil pouch that you can huddle in if you get trapped.

When the fire approached, they got out onto the lake. And each person had a shelter handy. They hesitated before using either strategy until it was almost too late. Why?

If you were stuck in a fire, wouldn’t you assume that the millions of gallons of water sitting in that lake was your best hope? All of the planners sure did, until someone tried it in a real fire situation.

Imagine you’re in the water 150 feet from shore where 100-foot flames are exploding up the trees. You think you’re safe until you realize that very strong winds are sucking you in toward shore. It turns out that a fire this big creates tornadic winds that actually pull you toward the fire. So now you’re having to swim against this wind as hard as you can with huge waves hitting you and smoke all around searing your lungs. It’s September, so the water is chilly. And maybe you’re just a tiny bit stressed out. To say this is bad is an understatement.

So maybe the water isn’t your friend as much as you thought after all.

Then there are the rescue shelters. Why did people being pelted by embers, completely enveloped by smoke, and frighteningly close to a raging inferno hesitate to deploy their shelters? They were following training. Wilderness personnel were repeatedly told, “Deploying a shelter is an absolute last resort!” (Check out this video explaining the proper usage of this sort of shelter. The point about shelters as last resort is made explicitly at the 5-minute mark.) That teaching was smart on the surface: it prevented people from taking unnecessary risks thinking the shelter would bail them out. And it probably made the shelter manufacturer’s lawyer happy.

I’m sure the trainers didn’t intend that people put themselves in mortal danger instead of deploying a shelter. But here’s how the wilderness safety team interpreted the training: If you deploy your shelter, you’re admitting that you’re in deep doo-doo. In fact, you’re admitting that you probably made a mistake somewhere along the way.  No one wants to be that guy who admits that, especially if there’s any chance you can pull off a great escape. “I’ve got this” is a way more confidence-inspiring attitude than “Holy $#&*$#, deploy the shelters!!!” So the unwritten rule became Carry the shelter, but don’t deploy it.

In the end, all of the members of this wilderness safety team survived this crisis after a day I’m sure they’ll never forget. The full report reads like an action movie screen treatment and is well worth the read. You’ll see that while the team all made it out, they needed a huge slice of luck.

It’s unlikely you dodge forest fires in your day job. But we can – and should – learn from this case. Here are a couple of things we might take away: