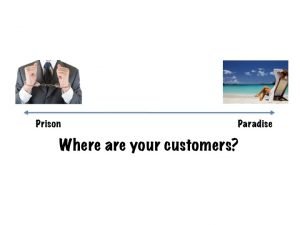 A less-than-stellar interaction with a telecommunications company led me to think about the difference between being in Prison or in Paradise.  (Let’s just say that the conversation involved the rigid enforcement of a certain 2-year contract.) In either place, you are unlikely to leave but for vastly different reasons.  In prison, you’re staying put because you have to.   In paradise, you could leave if you wanted to.  But who would want to?

Here’s my quick summary of the difference between Prison and Paradise:

Here’s the problem: from a naive, outside perspective, the behaviors in both places look remarkably similar! In both cases, you stay put. In a perverse way, prisoners can be seen as “loyal” since they don’t go anywhere.  But most of us would agree that captivity is not the preferred arrangement.

(The same is true for our most talented employees.  They may look loyal to us, especially when the job market is tough.  But if they feel imprisoned because they know that we know that they can’t find anything better right now… well, just wait until the job market improves a little bit and they see cracks in the cell walls.  The best ones will be running for the gates, never to return.)

Of course, this does raise an interesting question: why are so many of us content with being repeat offenders, willingly signing up for extended jail terms?

If the recent events in the Middle East teach us anything, it’s that whispers of freedom spread faster than ever these days and can suddenly gain inexorable momentum.  When that happens, just don’t be standing in front of the prison gate…