How to Provoke Change Without Alienating Your Peers

I Got The Big Job - Now What?, Influence

Sara has a problem. She was recruited into an important role at a new company, one where her ability to succeed is directly affected by how well she can get tenured colleagues at this well-established company to change how they think and act. She comes from a company and industry known for innovation. The company she’s joined, while no laggard, has lost its creative mojo over that past few years.

Sara’s no dummy. The first couple of months in her assignment, she acted patient, interested, open, respectful. If she was honest with herself, she would admit that it was partly just that – an act. Privately, she looked around at this company – and even this industry – and thought they had missed the boat on so many things that make a cutting edge company. Decisions seem bureaucratic.  Resource allocation seems upside down. She can see waste and old thinking all around her. Inwardly, she’s getting aggravated with the glacial pace of change, with what seems like the team’s willful blindness.

It came to a head today when Sara was in a meeting with her boss’s team. They were having their 27th discussion about how to allocate resources in next year’s budget. She could feel her blood pressure rising. She didn’t even notice that she had rolled her eyes a few times. To let off steam, she had made a few snarky comments to the other new team member next to whom she had strategically seated herself. She has a playlist of snappy one-liners dancing on the tip of her tongue, waiting to get out there like itchy thoroughbreds in the starting gate. 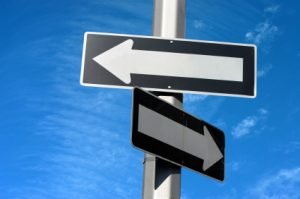 Sara stands at a crossroad. Here are the likely outcomes based on how she handles herself:

That kind of approach will begin to earn Sara the right to suggest alternatives instead of just getting slaughtered.

If Sara chooses that second option, she’ll be showing a different mindset – one of curiosity, respect, and appreciation. She’ll have to remind herself that you can both respect an organization’s past and acknowledge that it’s time for change. Grownups can hold those two things in their minds at the same time, avoiding the trap of thinking that you have to trash the past to motivate change.

Most of all, she’ll give herself a chance to make a difference, to serve this group of new colleagues with her different perspective and ideas. That’s why she’s here in the first place. She knows that the long-term road to happiness at work – and even to promotion if her mind is set on that kind of thing – comes through serving others.

If you’re trying to influence a team or a workplace, start there. Start with a mindset of service. Build curiosity, humor, respect, and appreciation on top of that attitude. Then persistently pursue excellence with your new colleagues. You’ll have earned the right to challenge them because you will have demonstrated that you’re for everyone’s success. Then even when your ideas and questions unsettle them, they’ll buy your intent.