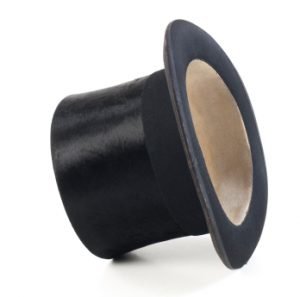 “Where have you been?” my friend Jeff asked recently. “I haven’t seen a post from you in like… months!?!”

Fair question. Where do I begin?

My last post was dated September 3, 2014. When I posted that piece, I knew it might be some time before I resurfaced. My dad had just been given the diagnosis we all dread, in his case as a perverse gift on his 84th birthday. The news was that his 15-year battle with cancer was coming to a close and that he was weeks away from finishing his life here on earth. Thirteen days after my last post, he died while in hospice care.

We saw this coming. In fact, I had anticipated the season of letting go of my dad for years. We felt fortunate to have had as many years with him as we did since doctors had given him pretty grim odds as far back as 13 years ago. He got to know all of his grandchildren and perhaps more important, they got to know him. He continued in his role as my mom’s best friend and increasingly, her caregiver as she lost her eyesight. I’m no fan of death since I believe we were made for life. But we have no complaints about how long we had with my dad and how well he lived.

We went through the pre-scripted events of my dad’s passing. As one of his executors and powers of attorney, I made visits to funeral homes, nursing homes, lawyers, and bankers. With my four fabulous brothers, their wives, and a network of my parents’ life-long friends, we planned for my dad’s memorial services and for my mom’s care. I wrote a eulogy I had been contemplating for 15 years, grateful that I received inspiration commensurate with the occasion. We had the services, beautiful and celebratory and sad because the one thing missing was Dad.

Then the sucker punch came. Nearly two months to the day after my dad’s death, my next-older brother died suddenly of a heart attack. Though we had gone our separate ways in recent years, he’s the brother I spent most of my time with as a kid. He probably had as much influence in shaping me as anyone outside of my parents. He was a constant in my life.

And then he wasn’t.

Another eulogy followed, a sad privilege I was granted by my sister-in-law. After never having done a eulogy, I wrote two in close succession, the kind of bumper crop no one craves.

Writing about business and work and all of that suddenly seemed impossible for a while. I didn’t feel wiped out. I felt deaf, dumb, and blind. I had nothing to say. My dad used to say about speakers occasionally, “He had nothing to say and said it poorly.” I didn’t want any of that here. I refuse to write when I have nothing to say. Lord knows, the world is chattery enough without me adding to the din.

One of my core beliefs about my life – and yours – is that every season of life has its own curriculum, designed with the potential to shape us into more of the kind of person that we were created to be. Nearly nine months on, I think I’m starting to see one big lesson that fell out of this season.

Thankfully, I haven’t had a lot of tragedy in my life over the years. So it was a new experience to be that person around whom everyone feels squeamish. When I showed up for client meetings right after these tragedies, people had different reactions. Some stared at their shoes. Others stumbled through condolences. A few wrote personal, heartfelt cards – some even the old-fashioned kind with a stamp and handwritten words. One leadership team I’ve worked with recently wrote a joint condolence card in an unusual show of compassion and camaraderie toward an outside supplier.

Too often, we’re cautious about showing each other our humanity at work. There’s an invisible line that we dare not cross between being professional and being human. Perhaps it’s because we have a tendency to compartmentalize our lives. Maybe it’s because we know that sometimes business requires us to do things that make us uncomfortable. I may have to disagree with you. I may have to fire you – or be fired by you. So we dehumanize our colleagues to protect ourselves from the messiness of being human. It’s a less extreme version of what we do in wartime, dehumanizing an enemy so that we don’t feel so badly about killing them.

Many  of those who expressed humanity to me in the days after my losses have very different viewpoints from me. Their compassion won’t change our disagreements. Bridging those disagreements isn’t why they extended themselves in the first place. But since they extended themselves, I’m inclined to be open and human with them, perhaps a little less guarded and less compartmentalized. I can’t see how that will be a bad thing for anyone or our business dealings.

My dad understood this. In fact, I now understand that he made a career of it. For years, I struggled to put the strands of his medical career into a coherent story. It looked scattered, with board certifications in pediatrics, public health, and family practice. Over the course of my dad’s career he treated children in the slums of the segregated south, mentally handicapped adults in New York state institutions, nursing home patients, and everything in between. He was well known in our community for patching people up on the deacon’s bench in our kitchen before the days of urgent care clinics.

But from the perspective of the end of his life looking back, it all became clear. My dad felt called to serve the ignored and helpless and under-served. It’s why a person I barely knew from the church I grew up at approached me at my dad’s funeral and said, “Your dad used to come and take my mentally ill husband out for drives in the country so that I could have a break. No one knew your dad did it and no one else could have done it. But he understood and he did what he could do.”

What if we all rejected the tendency to compartmentalize and dehumanize our work?  What if we stepped into the messy territory of realizing that it’s always human, even when – maybe especially when – it’s difficult? Yes, it’s risky. But living the other way has risks of its own, mostly to our souls. 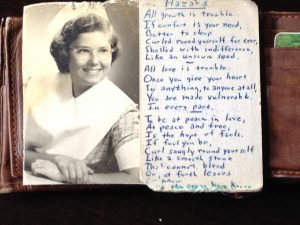 What’s in your wallet?

My dad trained himself to calculate the risks between self-protection and engaging with others. I know because I found evidence in the wallet he was carrying when he died. Tucked behind a college-era picture of my mom is an anonymous poem that he carried for around 35 years. He discovered the poem in materials he was using for teaching squirrelly middle school boys a Sunday school class at our church. It was a poem he referred to often publicly. I assume he reviewed it regularly in private.This copy was scrawled in his own handwriting on the back of one of his business cards from that bygone era.

All growth is trouble.

If comfort is your need,

Curled round yourself forever,

All love is trouble.

Once you give your heart

To anything, to anyone at all,

You are made vulnerable

To be at peace in love,

At peace and free,

Is the hope of fools.

If fool you be,

Curl snugly round yourself

Or put forth leaves

What the great have known.