The Biggest Barrier to Shining Brighter

Deep down, you want to make an impact. You want to be an and person.

You want to be about the benefit of others.

In short, you want to be who you were created to be instead of just cranking out a career and retiring to the golf course.

Then the excuses pop up.

Tell those excuses to the uncelebrated and overlooked people who clean hospital rooms. I dare you to think of anyone less powerful in a hospital than the people who clean the rooms. Doctors, administrators, nurses – just about everyone – is higher up the food chain than cleaners.

Nurses have to change bedpans. Cleaners aggregate those messes and then some.

A research team found an unusual group of cleaners at a hospital who saw their jobs as something much more than keeping things spiffy in the hospital rooms. Instead, this group saw their work as being part of the healing process for patients and their families.

On their own initiative and in spite of the rules, they rearranged their jobs to actively engage with patients and families. They showed compassion to people life circumstances brought their way.

Not one patient was there by choice. But the cleaners’ role gave them the perfect opportunity to make an impact. In an ironic twist, the patients’ confinement made them a captive audience for purposeful cleaners.

Their methods and motives were intriguing. One cleaner developed a theory about coma patients which led her to shift pictures on the wall in the hope that it would stimulate healing.

When the researchers asked her, “Is that part of the job?” she answered with a thought-provoking quote.

So next time you feel an urge to be brighter than your environment, to try to inject your whole self into your work in spite of – or even in defiance of – the organization’s rules, pay attention to the excuses that well up. Call them what they are – temptations. They’re temptations to turn down the wattage, to reduce the altitude, to keep your head down. 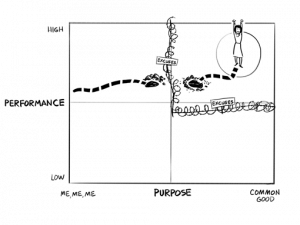 Temptations sound really good but they always carry a hidden cost. In this case, by caving to temptation, you miss out on the joy of being who you were created to be.

You’ll still have to clean the toilets. You just won’t get to be part of the healing.

Yes, this applies to anonymous individual contributors like hospital cleaners. But also to team leaders and executives. And CEO’s and board members. And partners who don’t yet have the biggest job in the firm. To everyone, in fact. Definitely to me. Probably to you too.

So name your temptation, wrapped like a python around the neck of your who-you-were-created-to-be self. Stick a knife in it. You may not control everything, but you can do something that will bring more light to your work.

Do it for those who will benefit around you. Do it for your teammates who may just seize on the inspiration and join the movement.

If for no one else, do this for yourself. Do it because it is part of YOU.

Becoming who you were created to be beats caving to excuses every day. 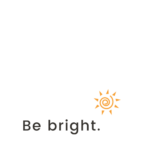