Three Marks of a Rich Company

Years ago, I was lucky enough to tour Israel and Palestine with a long-time mentor of mine who just happened to be an expert in the area’s ancient history and current, complicated situation. As part of our tour, we stopped in on Elias Chacour, a remarkable Palestinian Catholic priest who has spent his life building bridges of peace, reconciliation, and justice over a 30+ year career in a poor Palestinian town.

But to really understand this man’s passion, you must get this important detail: one of his earliest memories is the leveling of his ancestral village by Israeli soldiers during Israel’s war of independence. From the seed of that searing memory of tanks and bulldozers knocking down his village and tearing up his family’s olive grove eventually came surprising fruit. After years of understandable confusion and anger, he dreamed of a school in which Jewish, Christian, and Muslim children would advance academically and learn to love and accept each other at the same time.

Chacour told us of the twists and turns his story had taken from the moment of that vision to the reality we saw before us. On a hill in the West Bank sits a thriving school, recognized as one of the top academies in all of Israel, with children of Muslim, Jewish, Christian, and Druze backgrounds learning and playing together.  At times, driven by his vision, he had taken drastic measures to fight systems and structures that stood in his way – like the time he traveled to Washington, DC and cold-called James Baker, the sitting Secretary of State, at his own house in an effort to influence the Israeli government. If only Twitter had existed back then and Chacour had snapped a picture Mrs. Baker’s face when she saw a bearded Palestinian priest in full priestly garb waiting on her front step… 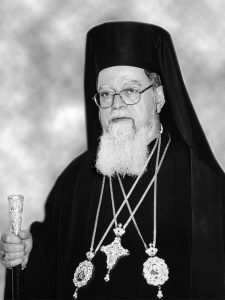 At the end of his talk, many in our group instinctively did what Americans do – we reached for our wallets, assuming that a financial contribution would be the appropriate gesture of appreciation.

The priest stood back, almost appalled. “Please,” he said, “I don’t want your money.  If our story has inspired you, I ask for your friendship.  For if all you have is money to give, you are very poor indeed.”

Leaders tell me all the time that their company’s purpose is to generate great returns for owners and investors. If that’s all a company does then they may be rich in profits, but poor in spirit. If you are in it only for the money, don’t be surprised when everyone else–your employees, your customers–are mercenaries, only in it for the money. Don’t be surprised when they misbehave. They will. Everybody misbehaves when self-interest is the primary interest.

In my work with leadership teams, I often get involved in helping leaders shape the futures of their organizations.  We spend hours reflecting on what the organization’s past, present conditions, and future opportunities mean for the course they should chart.  We run numbers. We examine data.  We hurt our brains in multiple ways.

It’s all worthwhile. But it’s not enough.  Because at the end of the exercise, we always come back to the same question: How are we going to get the rest of the organization to buy into this direction? If all we have to show for our work is spreadsheets and models, that conversation is almost guaranteed to fall flat. You can almost hear the sound of people’s minds switching off during that company-wide presentation. Click. Click. Click.

People are not coin operated machines. While they certainly want to do well financially and be in a company that produces business results, money isn’t enough to make the human being run.  Oh yes, it’s necessary.  Show me a company in financial distress and I’ll show you a whole pack of people who have sincere interest in the numbers.  But for the vast majority of people, the numbers are the means not the ends.  They want something more.

What do they want?

So stop for a moment and ask yourself a few questions:

Earn money.  It’s necessary and can have huge power for good. But don’t allow your organization to only earn money. Because, to paraphrase a wise man from Palestine,  organizations who only produce profits are very poor indeed.