Three Questions To Ask If You Hate Cliffs

I wasn’t in the room when Newsweek’s leaders decided to end its 80-year print run and go all-digital. But Tina Brown’s note to readers in a recent issue of the magazine reads like a textbook case of what happens when you get Altitude.

The jury is still out on whether Newsweek’s move is too late or even a clever strategy to ditch weekly publishing while avoiding refunds to current subscribers. It’s safe to say that no leadership team prefers to wait until their model is busted and their company is nearly broke to make a change.  Regardless, there’s nothing like the moment when the muddle of being stuck in the forest of everyday work transforms into the crystal clarity of surveying things from a higher Altitude.

There’s an almost audible sigh in the room. Finally. We see it. Clearly. 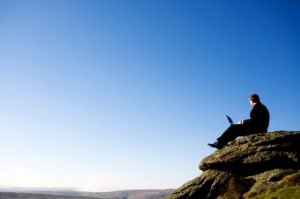 But don’t think that gaining Altitude comes easily. It can take a long slog through some tough questions. Let’s take a look at a few of the questions leadership teams have to muck through and imagine the food fights that probably went on at Newsweek:

Many people delay having Altitude conversations because it takes time and they’re stuck in the monthly/quarterly grind. Some say you need a crisis to get you moving. And I guess you could wait until you have emphysema before you quit smoking. You could wait until you’re on the verge of the cliff before steering the car to safety. But waiting for the crisis – the moment when you’re on the verge of folding – is rarely the best answer. Wisdom foresees danger and opportunity in equal measure. It stops. It digs. And then it acts. And by acting, it often avoids a Tina Brown moment by getting in front of the disaster.

It’s almost 2013. The clock starts again soon. What Altitude conversations do you and your team still need to have?